I interviewed Linda O’Bryon, the senior vice president and general manager of NBR Enterprises/WPBT2, which produces Nightly Business Report, seen nationally on more than 250 public television stations, earlier this week for a Q&A. The full Q&A appears on www.bizjournalismhistory.org. 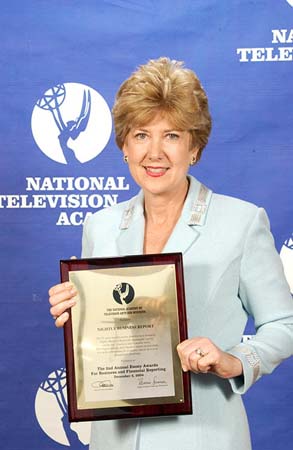 Here are some excerpts that I found interesting:

Q: How hard was it to get business people to come talk on the show?

A: It was hard and some of it was because it was television. In the early days, when we were a local program, it was often hard to interview CEOs. They were used to a print situation.They didnâ€™t like a camera and lights. We had to do a lot of convincing. We had to explain that we were going to ask questions that were tough but fair. We just little by little gained ground. When we went national, I thought it important that we development some national commentators to give analysis to the program. One of the first people I called was Alan Greenspan, and he agreed. He was the first commentator on the first national show on Oct. 19, 1981. He stayed with us until he became Fed chief.

Q: Do you think that business journalism on television doesnâ€™t get the respect that it deserves?

A: There is so much business news on the Internet now, and it is readily available. I think business news gets the respect when it does a good job, when there is good story telling and visuals. But if itâ€™s done in a way thatâ€™s just sort of repeating wire stories and numbers, and itâ€™s not doing the job that television was meant to do. To the extent that a news organization can tell good stories, itâ€™s going to get good respect.

Business news in general has come into its own. In the late 1970s, it was not the beat that most reporters wanted.

Q: How did you learn about business issues and topics?

A: Going back to my early days, just listening to my grandmother. I always sort of had that in the back of my mind. My cousin is in the financial world in New York. So I guess through family exposure, that was a start. And then when we started the program, I just immersed myself. That was about the time that Larry Birger started Business Monday at the Miami Herald. You just have to totally get into the subject and research it. Every interview I do is a lot of research.

Q: Where do you see business journalism on TV and in print heading in the future?

A: I think the technology is just the biggest driver. The fact that you can access information instantly, you can get it on your cell phone. I think those things will continue to grow. In televisionâ€™s case, there will always be an important role for business news. People want to see information compiled in one source and not have to gather it, to see good stories and to get ideas from the visual part of it. I think that will continue. I think there will be a lot of connections. You may hear a short segment and then want to read it in the newspaper. Weâ€™ve talked so long about convergence, and I feel that we are there.