According to the TVNewser, cable channel CNBC was the first to break the news that Microsoft co-founder Bill Gates would step away from day-to-day operations of the software company to spend more time running his multi-billion dollar charity. 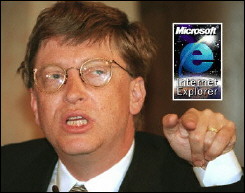 TVNewser reported, “CNBC was first with the Bill Gates news this afternoon. (New senior VP Jonathan Wald ran into the control room to cut short an interview and get the Gates news on air, a tipster says.) Fox News is supposed to be airing business news at 4pm, but Neil Cavuto was a minute and a half behind CNBC with the announcement. (Updated at 7:02pm.)

“FNC still beat the other cable news nets. CNN aired part of Gates’ announcement, but MSNBC didn’t, even though the channel used to be a 50/50 partnership between Microsoft and NBC…”