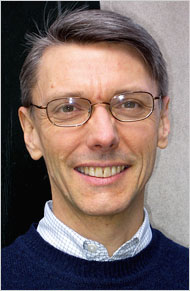 McKenna wrote, “After a good seven-year run, Circuits was retired as a weekly section in March 2005. While that decision turned on business considerations, the sectionâ€™s editorial mission was also evolving. Circuits was conceived as a place to look at the ways digital technology was being used in everyday life and transforming everything from the arts to air travel. It was a section, we liked to say, about anything with a chip in it. But weâ€™ve reached a point in the digital age where technology is so central to so many coverage areas that the kinds of stories once reserved to Circuits are now being told on the front page and all over the paper.

“Circuits remains a part of the Thursday paper in abbreviated form, within the Business Day section, with a focus on consumer products and video-game reviews. It also makes a periodic reappearance, roughly six times a year, as a separate section devoted to specific technology themes.”

Later, he wrote, “I’d say the approach The Times takes to technology is quite comparable to foreign coverage. In either realm, there are publications (and Web sites) for professionals and other experts; we respect and pay attention to those. Our space and readership are different from a single-topic publication. But I’d say that our goal is to cover the tech world better than anyone else – *and* to tailor it to Times readers. That means providing reporting that is a must-read for the specialist and compelling and accessible to the intelligent lay reader.”