Eric Pfanner of the International Herald Tribune notes that Reuters CEO Tom Glocer has been aggressive in making changes at the business wire and information service in its attempts to regain market share against rival Bloomberg News.

Pfanner wrote, “With 2,400 journalists globally, news is something that Reuters produces in abundance. Glocer said he considered news gathering an integral part of Reuters’s business. The company disclosed plans last week to hire an additional 100 journalists to expand coverage of lifestyle and entertainment topics and of fast-growing economies like those of India and China. 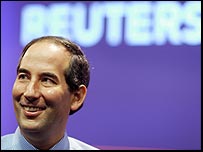 “In terms of revenue it generates directly, journalism is a tiny part of its business. The media division, which distributes the news agency’s output to newspaper publishers and broadcasters and sells advertising on the Reuters Web sites, accounts for less than 10 percent of total sales.

“Yet the business of the Web site is also one of the fastest-growing areas at Reuters, with double-digit revenue gains, Glocer said.

“The news agency is also finding some new outlets for its work, including a partnership with The Times of India in which Reuters provides content for a 24-hour English-language television news channel called Times Now.

“Some analysts say Glocer’s initiatives may not generate enough revenue to justify the investment. While the company’s shares are trading at roughly four times their 2003 lows, the recovery seems to have stalled in recent months.”