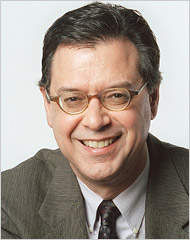 Kantrow wrote, “Ingrassia’s TV appearance, which was given added drama by the fact that one of his inquisitors, Charles Gasparino, used to work for him at The Wall Street Journal, is just the latest example of how the Times, in its quest to take down a big, rich fish, has once again managed to attract attention to itself and its reporting process, rather than to its target â€” a trend most famously illustrated by its ill-fated crusade against Hootie and the Augusta National gang a few years ago. Except for Congress, which quickly invited the paper’s star source, former SEC lawyer and self-styled whistleblower Gary Aguirre, to testify at its hearings on hedge funds, most of Wall Street zeroed in on potential problems with the Times’ journalistic standards, rather than on any alleged wrongdoing by Mack or Pequot.

“Most disturbing was the paper having reported Aguirre’s claim that he had accumulated evidence that pointed to Mack’s involvement in an insider trading scheme but failed to provide even a hint as to what that evidence was. The lack of skepticism was stunning and raised a barrage of questions: Had the Times actually seen Aguirre’s evidence? Had its Pulitzer Prize-winning reporters, Walt Bogdanich and Gretchen Morgenson, tried to corroborate Aguirre’s story on their own? Aguirre’s contention that he was fired after requesting to subpoena the politically well-connected Mack was similarly taken pretty much at face value by the Times, which waited until the very end of its piece to point out that Aguirre had clashed with the SEC even before he worked there; when there was a delay in his hiring, the paper noted, the former California plaintiffs’ attorney filed an age discrimination complaint with the Equal Employment Opportunity Commission.”

Later, Kantrow wrote, “There is much that’s odd about the Pequot story, including watching a clearly uncomfortable Ingrassia attempt to defend the Times’ piece on CNBC. Gasparino and colleague Becky Quick doggedly questioned the paper’s decision to give the story such big play without fully knowing the extent of the SEC’s insider trading investigation into Pequot and Mack and how far along and serious it actually was. Ingrassia maintained that it is impossible to prejudge a case before it plays out. Perhaps. But isn’t that exactly what the Times did by running its story on page one?”