Fox business anchor Neil Cavuto notes that Christmas sales have been strong, yet he wonders why so many in the media have been ignoring the big boost and focusing instead on Wal-Mart’s weak sales. 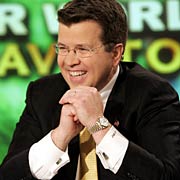 Cavuto stated, “That’s 140 million shoppers, spending on average slightly more than $360. A lot more than the $302 they spent last year.

“As I said, about 19 percent more. Again, it is a big number. But apparently to much of the media, it’s not a big deal.

“Frankly, Wal-Mart’s been bashed in the press so much, I’m surprised anyone’s showing up there. Still, its stores were busy too.

“But most who report on this stuff were busier reporting what stinks, not what soars.

“I know it’s still early. Certainly too early to say things will be great.

“But also way, way too early to say they won’t.”

Read more here. Funny, but my impression of the media coverage of the Christmas shopping season so far has been that everybody is saying that sales will be great.