Richard Perez-Pena of the New York Times writes about a parody of The Wall Street Journal that is being snapped up at newsstands across the country — by someone from the Journal. 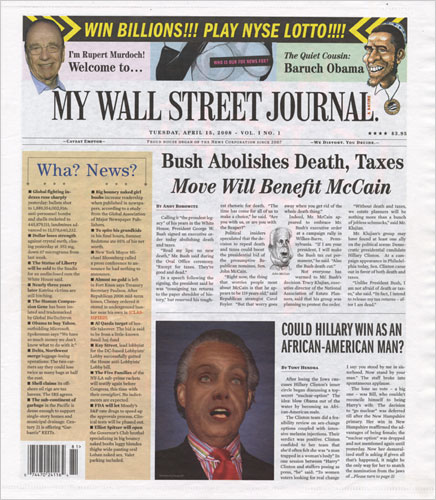 Perez-Pena wrote, “The tabloid-format satire, ‘My Wall Street Journal,’ mostly sets out to skewer The Journalâ€™s new owner, the News Corporation, and its chairman, Rupert Murdoch, with swipes at News properties like Fox News, The New York Post and The Journal itself. It takes aim at other targets, too, including Wall Street firms and traders, and assorted politicians and pundits.

“It was not supposed to go on sale until this week, but some newsstands began selling it early. Last Thursday, Alexander Laurence was working at one such stand in Los Angeles, chatting with a customer, David Metz, when, both of them say, a man in a shirt with a Journal logo asked if anyone had seen a paper that looked sort of like The Journal.

“Sure enough, they found what he was looking for. ‘He grabbed them all, said, â€˜I need to buy all of these,â€™’ Mr. Laurence said. ‘He had been going around to different stands, buying them.'”