The future of business journalism

Slate.com media columnist Jack Shafer writes Wednesday night about the future of business journalism in the wake of a Wall Street Journal article earlier this month about how some lobbying firms are charging clients thousands of dollars for information they’re collecting in Washington. 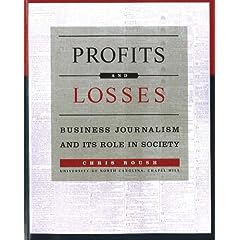 Shafer and I had a long e-mail conversation about the topic last week via e-mail, and then by telephone as well.

Shafer wrote, “The first journalism marketed both financial information and political intelligence. In the 15th and 16th centuries, the Fugger banking family established a network of correspondents throughout Europe to keep tabs on local business, Chris Roush writes in his new history of business journalism, Profits and Losses: Business Journalism and Its Role in Society. Correspondents filed the prices of goods and services to the Fuggers, who then used the information to set the price of loans. The family’s business newsletter alerted its exclusive clientele to a wide array of commercial, exploitable news, including the ‘deaths of kings and queens, wars, the arrival and departure of ships, the burning of the exchange in Antwerp, executions, and the demise of the Spanish Armada,’ Roush writes.

“Even the mass-circulation Wall Street Journal owes its origin to the information demands of a wealthy few. Roush notes that three reporters named Charles Dow, Edward Jones, and Charles Bergstresser launched Dow Jones & Co. in 1882 ‘to sell news and gossip items to stock brokers, bankers, and speculators.’ A few years later they started the Wall Street Journal, ‘a four-page newspaper devoted solely to stocks and bonds.’

“As a business news operation gets better at distributing informationâ€”i.e., building circulationâ€”a strange thing happens to the value of information collected. Only the first readers who receive and act on the information can profit from it. For example, the Wall Street Journal provides a rich data dump six days a week, but it’s futile for all 2.7 million readers to act on it, because the commercial advantage is quickly harvested.

“The circulation successes of business publications are only one force driving lobbyists to practice journalism. Every new government rule or regulation forcing businesses to become more transparent in their financial reporting and disclosure comes at the expense of Wall Street veterans and benefits the civilian investor poking around on the Web. As the business-journalism arms race spirals outward, the painfully rich must dig even deeper into their pockets to pay for their precious tips. The pricey, limited circulation business newsletter gets outflanked by the ultra-expensive Bloomberg terminal delivering the news instantaneously. You see the pattern.”