Stephanie Clifford of the New York Times writes Monday about how decades-old photos of Bernie Madoff are now in demand that he has been charged with running a financial scam. 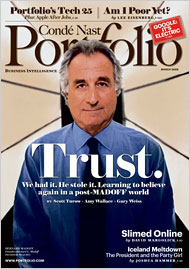 Clifford writes, “Mr. Saunders had largely forgotten about the session when a photo editor from The Wall Street Journal called him in mid-December, asking for a copy of a photo of Mr. Madoff.

â€œ’I was like, thatâ€™s kind of weird, thatâ€™s a 10-year-old portrait I did of a guy I donâ€™t remember, and they were very eager to pay my minimum and get it in the paper,’ Mr. Saunders said. ‘Then, within five or six hours, there was an avalanche of Google news alerts about it, and I was like, oh. Iâ€™d better make better scans.’

“Photos from the shoot have run in The Journal and The Daily News, and Mr. Saunders is fielding requests from television stations and the international media.

“The images from the session are all rather one-note, Mr. Saunders said. ‘Most of them, he just looks kind of bored. Some heâ€™s looking very serious,’ he said. On the trading floor, he did get Mr. Madoff to crack a smile.”