The CEO of Hootsuite, a Canadian social media management startup, responded to a Bloomberg reporter’s request for comment on Tuesday by directing him to a paid sex phone hotline, reports Caroline O’Donovan of BuzzFeed.

O’Donovan writes, “Bloomberg News reporter Gerrit De Vynck published a story making the case that Hootsuite is overvalued at $1 billion and is undeserving of its so-called unicorn status.

“Hootesuite CEO Ryan Holmes (who maintains that the company is, in fact, worth more than a billion dollars) took to Twitter, decrying Bloomberg’s headline (‘Hootsuite: The Unicorn That Never Was‘) as salacious, and complaining that that the De Vynck published his story without comment from Hootsuite.

“The Bloomberg reporter tweeted back at Holmes with his phone number, asking the CEO to call him. Here’s what Holmes tweeted back: 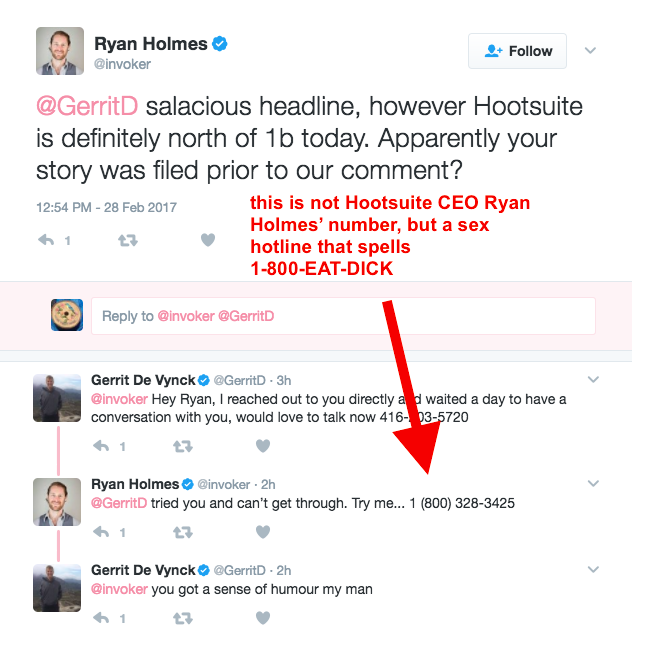 “The thing is, that’s not Holmes’ phone number — it’s the number for a paid sex hotline — 1-800-EAT-DICK. When you call it, a man’s voice offers you unpublishable favors, if you simply enter a valid Visa, Mastercard or American Express credit card number.”