Another editor helps Portfolio get out the door 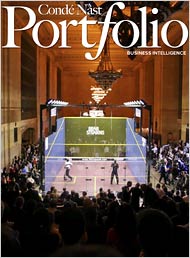 Calderone wrote, “Mr. Caruso, who abruptly left his last job as Menâ€™s Journalâ€™s editor in chief in October 2005â€”and won a six-figure settlement from publisher Jann Wennerâ€”was hired last January as a freelance editor. For the first issue, he will have the title of ‘contributing editor-at-large.’

“Formerly editor in chief of Details, Mr. Caruso is no stranger to expensive launches, either: He helmed News Corp.â€™s now-defunct Maximum Golf in 2001.

“Initially, Mr. Caruso only showed up occasionally at Portfolio, but soon started keeping regular hours on the 17th floor; he grabbed the office used by Matt Cooper when in town from Washington, D.C., according to a staffer.

“(Mr. Cooper has since been relegated to a cubicle near the staff writers.)”