The New York Times’ Katherine Seelye also weighs in about the launch of Conde Nast Portfolio in Monday’s newspaper. 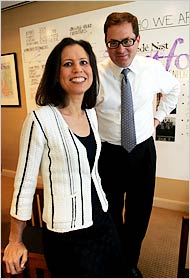 Seelye wrote that editor Joanne Lipman told another editor at the magazine that she empathized with the Meryl Streep character in “The Devil wears Prada” and that the Kurt Eichenwald piece on terrorism was held out because the writer dumped thousands of pages of documentation on fact checkers, not to downplay his involvement in the magazine in the wake of ethical concerns about an article he wrote while at the Times.

Seelye wrote, “Mr. Newhouse said that Portfolio had been inspired by a positive response to business articles in Vanity Fair and The New Yorker, although he could not recall precisely which ones. He also said he had not made the final decision to proceed until Ms. Lipman agreed in August 2005 to leave The Wall Street Journal, where she had overseen its Weekend Journal and Personal Journal sections and its Saturday paper.

“Mr. Newhouse said that his reported commitment to the magazine of more than $100 million over the next five years was ‘something of a myth’ because ‘weâ€™re going to stay with Portfolio.’

“Portfolio has hired more than 75 editorial people for the magazine, 40 for its Web site, www.portfolio.com, and more than 45 on the business side.”