The Wall Street Journal’s Paul Steiger, the paper’s managing editor, has been named chairman of the Pulitzer Prize board, according to a Monday news release. Let’s hope that this means that business news coverage will get more attention 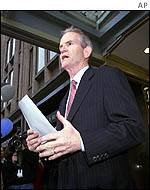 in the naming of the awards. No business journalism stories won a Pulitzer this year.

The release states that Steiger, who has been a board member since 1998, replaces Harvard University professor Dr. Henry Louis Gates Jr., who had served on the Pulitzer Board since 1997. Members of the board serve a maximum of nine years.

The 2006 Pulitzer Prizes were announced on April 17, 2006. An awards ceremony honoring this year’s winners will take place on May 22, 2006, at Columbia University, which administers the annual awards.