The revamped Worth magazine

Stephanie Clifford of the New York Times writes for Monday’s paper about how Worth magazine has been changed under new ownership, including its $18.95 newsstand price. 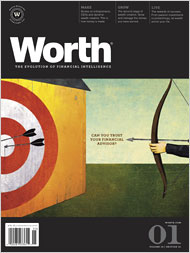 Clifford writes, “Sandowâ€™s plan for Worth is to keep the personal finance coverage, with stories on the pitfalls of philanthropy or interesting investment vehicles, but make it more luxe. It will use matte paper, and the covers will be artsy photographs unrelated to articles inside, Mr. Williams said. After the spring issue, which is being printed now, Worth will take a hiatus, then go bimonthly with the October/November issue.

“The business model is different from before, and similar to Sandowâ€™s magazine NewBeauty, which covers plastic surgery and includes promotions from surgeons. Along with regular advertisements, Worth will sell packages to financial advisers, who will pay $30,000 to have their essays on wealth and biographies included in every issue. The section will be marked as a paid advertisement.

“For its circulation, Worth has selected about 110,000 high-end recipients. They have a minimum of $2 million in wealth, but because ‘we feel that even in todayâ€™s marketplace, $2 million doesnâ€™t make you the most affluent American around,’ Mr. Williams said, there are other requirements.”