The Puget Sound Business Journal and secrecy behind its layoffs

Rami Grunbaum, deputy business editor of the Seattle Times, writes Sunday about why the Puget Sound Business Journal hasn’t written about its own layoffs. 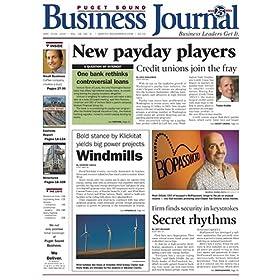 Grunbaum, editor of the publication from 2002 to 2004,Â writes, “Not only did the prize-winning Seattle newsweekly neglect to cover its own cuts â€” publisher Emory Thomas Jr. went a step further, according to several sources: He warned that anyone who talked or blogged about the cuts could be fired.

“The paper laid off seven people April 24: three of the 19 in its newsroom and four in its business operations. A revised staff box published Friday shows 39 employees, down from 50 in February.

“Thomas, the Business Journal’s editor before he became publisher, said in a written response to questions that ‘these are challenging times’ but ‘the paper remains solidly profitable.’ He declined to discuss the number of layoffs and didn’t address his warning to staffers.

“Not surprisingly, the paper’s journalists had absolutely no comment.”