The Blooomberg Markets ad campaign: Too much like the Economist's?

Stuart Elliott of the New York Times writes Tuesday about the new advertising campaign for Bloombeg Markets magazine, which uses the slogan describing its readers as the “global financial elite.” 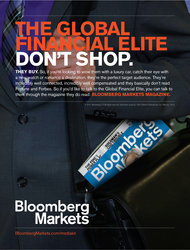 Elliott writes, “‘We chose those three words very carefully,’ Mr. Dukmejian says, including ‘global’ to highlight that ‘more than half our circulation is outside the United States,’ in financial markets like Frankfurt, Hong Kong, London and Tokyo.

“As for the idea that the word ‘elite’ is too charged to use in an unsettled economy, he replied: ‘If they are elite, so be it. That’s who they are.’

“Labeling the readers of Bloomberg Markets ‘elite’ provides an echo of the long-running campaign for The Economist magazine, which portrays its readers as important, affluent and intelligent — an elite, if you will.

“‘We want some of their ad categories, absolutely,’ Mr. Dukmejian says, but rejects a suggestion that Bloomberg Markets suffers from ‘Economist envy.'”