Shortlist for Business Book of the Year is announced 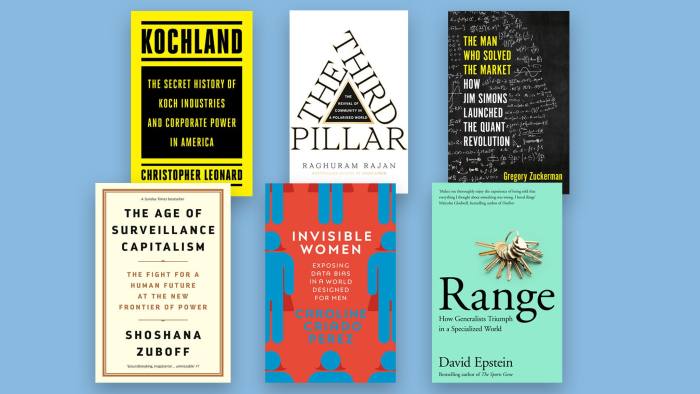 Books on data privacy, bias against women and the rise of the politically powerful conglomerate Koch Industries are among six titles on the shortlist for this year’s Financial Times and McKinsey Business Book of the Year Award.

Andrew Hill of the Financial Times writes, “The shortlist for the £30,000 prize was announced in London on Monday by Kate Smaje, senior partner at McKinsey. The award will be presented in New York on December 3.

“The shortlist comprises: Shoshana Zuboff’s The Age of Surveillance Capitalism about the implications of how Google, Facebook and Microsoft treat our personal data; Invisible Women by activist Caroline Criado Perez on how designers and developers have persistently excluded or played down women in the data they use; Christopher Leonard’s Kochland, on the history and influence of Koch Industries; reporter Gregory Zuckerman’s The Man Who Solved the Market, a narrative biography of Jim Simons, the secretive founder of quant fund Renaissance Technologies; The Third Pillar, by Raghuram Rajan, a broad prescription for reform of capitalism; David Epstein’s Range, which makes the case for generalists in a world of increasing specialisation.

“‘This year’s authors probe critical challenges that every business is struggling with,’ said Ms Smaje. Lionel Barber, FT editor and chair of the judges, said the panel had praised the ‘range and depth’ of the finalists.”