Stephanie Smith of Women’s Wear Daily reports Tuesday that Fortune magazine is seeking volunteers to take a buyout so that it can trim its staff. 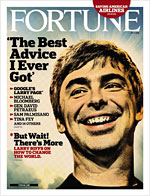 Smith writes, “Managing editor Andy Serwer sent a memo to staffers Monday morning asking for volunteers among its senior writers, writers and writer/reporters to take severance packages. Sources close to the magazine said that up to 15 people could be eliminated, but a specific number was not confirmed by the magazine’s spokeswoman.

“Employees have until May 27 to decide whether to take a buyout. Time Inc. is also said to be trimming staff at the Fortune Group’s business library, which could eliminate up to five jobs.”