CNBC “Mad Money” host Jim Cramer was at the University of Oklahoma on Friday for a taping, and Don Mecoy of The Oklahoman talked to him about his show. 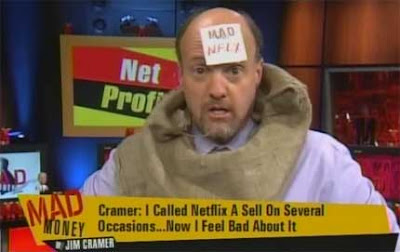 Mecoy writes, “‘Iâ€™m an entertainer about business â€” a business entertainer,’ he said a few hours before taping his show while at OU. ‘Iâ€™m a televangelist for money. I do a one-man sports show about business.’

“When asked about his regrets, Cramer immediately recalls some bad recent market calls.

“‘I try to do a good show every night, but Iâ€™m very critical of myself,’ he said.

“He believes he was humiliated during a confrontational appearance on ‘The Daily Show With Jon Stewart‘ but is proud that he maintained his composure â€” and that his spot produced a bump in ‘Mad Money’ ratings.

“‘(Stewart) apologized to me immediately after the cameras went off,’ he said. Cramer said he would appear on the show again only if Stewart would make his apology public.”