Confirming the accuracy of a story

David Hinckley, the TV editor of the New York Daily News, writes Wednesday that CNBC anchor Mark Haines’ legacy will be his insistence on sticking to the facts. 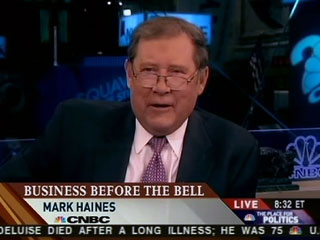 Hinckley writes, “He reported business and financial stories in terms that civilians could understand, but colleagues said today that his entertaining style did not lead him away from confirming the accuracy of his information.

“In an ultra-competitive environment and a business where rumors are daily currency, colleagues said Haines insisted on checking reports and rumors before relaying them to listeners.

“He became such a respected fixture in the financial media community that the New York Stock Exchange observed a moment of silence this morning upon hearing of his death.

“One of his best-remembered moments was saying on March 10, 2009, that he thought the financial markets had hit bottom — just 24 hours before they did. This led his long-time on-air partner Erin Burnett, who left for CNN earlier this month, to admiringly call it ‘The Haines Bottom.'”