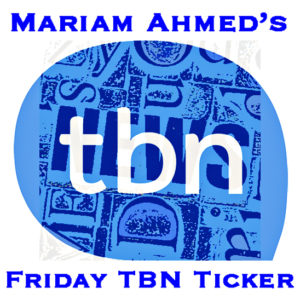 Looking for a great way to end the week and stay up to date? Starting today, TBN content correspond Mariam Ahmed brings you the best of media news and moves with a weekly Friday roundup that recaps what you may have missed, with updates and fresh insights. It’s the latest in a series of regular features we’re adding to the TBN lineup — with many more to come in the weeks ahead. Enjoy! Lou Carlozo, Editor and Publisher, Talking Biz News… A CNBC cancellation … CNBC has canceled “The News with Shepard Smith,” its primetime general news show. Smith will leave later this month and CNBC will invest in a new Business News program scheduled to debut in 2023. CNBC president KC Sullivan  writes, “Decisions like these are not arrived at hastily or taken lightly. I believe this decision will ultimately help to strengthen our brand and the value we provide our audiences.” But it’s a head scratcher, as Smith’s show doubled the network’s 7 p.m. ET viewership and attracted the “wealthiest audience of any primetime cable news program over the last two years,” as per Sullivan.

Outside Insider’s paywall … Insider, which is also impacted by the broader ad market slowdown, is planning on moving some content outside of its paywall. Sara Fischer of Axios reports, “About 60 paywalled writers are expected to have their work moved in front of the publication’s paywall.”  Nicholas Carlson, global EIC of Insider added, “The new moves will help to create more traffic, and thus more inventory to sell ads against.”

Deadlines and taxes … Julie Zauzmer Weil will join The Washington Post’s business desk to helm a new line of coverage on taxes. As per the Post, “Julie launches this beat as the Internal Revenue Service embarks on a historic and highly controversial expansion. Meanwhile, resurgent Republicans on the Hill are vowing to extend and expand the expiring Trump tax cuts, a fraught exercise bound to leave readers’ heads buzzing with urgent questions — questions Julie is uniquely positioned to answer.”

Trading TechCrunch for a partnership … Jordan Crook, deputy editor for TechCrunch, has left to join Betaworks as a partner. Crook wrote for publications, including Mobile Marketer and MobileBurn. Crook graduated from New York University.

Endpoints remains indie, period … Endpoints Founder and editor John Carroll says, “We will remain independent.” Recently, the biopharmaceutical news site hired Bloomberg’s Drew Armstrong as its executive editor. Carroll wrote, “This hasn’t been a quick hire, and while I often wished it had gone faster, I appreciate now more than ever the chance I had to get to know Drew before we all signed on the dotted line recently. The insights he’s offered on our business, his ideas for growth, his energy and purpose for creating Endpoints 2.0, and 3.0, have been a real learning experience.”

A tech writer’s tweak … Brian X. Chen, the lead consumer technology reporter at The New York Times, offers insight about how he has changed his writing in his Tech Fix column. Writes Chen: “On Wednesday, our rebooted column examines popular internet-connected surveillance cameras like Ring and whether they do more harm than good. In the coming weeks, we’ll write about how smartphone ownership has become similar to car ownership — and how our behavior around buying phones can still change for the better. And we’ll explore websites and stores that request our phone numbers and email addresses, and what this means for our privacy.”

Taking a break … Staff science writer at The Atlantic, Ed Yong has taken a six-month sabbatical. Yong tweets, “These past 3 years have been the most professionally meaningful of my life, but they’ve also deeply broken me. The pandemic isn’t over, but after a long time spent staring into the sun, I need to blink. I’ve talked openly about the mental health challenges of pandemic reporting. I know stepping away is a huge privilege most people don’t have. Persistence matters, but it has limits, and I’ve long since reached mine.”

In memory … Neema Roshania Patel, editor of Next Generation Audience Development at The Washington Post, passed away on Oct. 24 at a hospital in Washington. The cause of death was gastric cancer, said her husband Akshar Patel. Phoebe Connelly, senior editor of Next Generation, wrote of Patel in an email, “What stood out immediately was her desire to collaborate — to take what she had learned running The Lily and infuse it into every department, every article and every project.”

A landmark grant for climate change coverage … The Reuters Institute for the Study of Journalism has announced that the Oxford Climate Journalism Network (OCJN) has been awarded a £435,000 grant by Laudes Foundation, which will “enable the OCJN to sustain its operations until the end of 2023 on all four pillars of the network: online six-month courses with practising journalists, short courses with newsroom leaders, original academic research into climate reporting and journalism fellowships for mid-career journalists.”

Best in biz books … The Society for Advancing Business Editing and Writing announced the winners and finalists for its third annual Best in Business Book Awards. “Flying Blind: The 737 Max Tragedy and the Fall of Boeing” by Peter Robison, published by Anchor Books, was chosen as the winner in the “Business Reporting” category, sponsored by Investopedia. More details can be read here.