What will the Bancrofts want from Murdoch?

Andrew Ross Sorkin writes in the Sunday New York Times about what the Bancroft family that controls Dow Jones & Co., the parent of The Wall Street Journal, will want from News Corp. CEO Rupert Murdoch to become convinced that they can sell the company to him and he won’t interfere in its journalism.

The two sides will meet Monday to discuss a potential deal, but will likely focus first on the editorial independence of the paper. 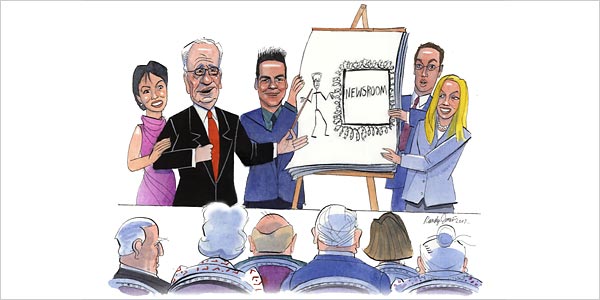 Sorkin wrote, “That sounds nice, but the Bancrofts are going to want a board that acts like a cop on the beat and is able to withstand any efforts by Mr. Murdoch to become a puppeteer. After all, as Harold Evans, the former editor of The Times of London, wrote in his book, ‘Good Times, Bad Times,’ he once challenged Mr. Murdoch about violating his pledge of editorial autonomy. And what, according to Mr. Evans, was Mr. Murdochâ€™s reply about that promise? ‘Theyâ€™re not worth the paper theyâ€™re written on.’

“The Bancrofts are expected to raise the possibility of structuring any sale so that it resembles Thomsonâ€™s recent acquisition of Reuters, people close to the family said. In that transaction, Thomson will maintain a board of independent outside trustees. That board will oversee both the editorial integrity of its news products and play a role in business affairs (including having the ability to block a takeover and influence the companyâ€™s corporate board.)

“Advisers are toying with a possible mechanism that might keep Mr. Murdoch from getting too much ink on his fingers, according to people involved in the talks. He and his executives could pledge that they would have no interaction with the newsroom without being chaperoned by an ombudsman, who could also write in the pages of The Journal if Mr. Murdoch or anyone from the News Corporation tried to influence news coverage. It may sound silly and perhaps a bit overboard, but it would go a long way toward assuring the Bancrofts â€” and maybe even the public â€” about Mr. Murdochâ€™s pledge to be truly hands-off.”