New York City deputy mayor Daniel Doctoroff will become president of Bloomberg LP, the parent company of Bloomberg News, according to a story in the New York Sun on Friday.

Peter Grauer, the company’s chairman, is giving up the president title but will remain chairman. 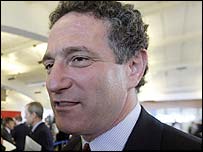 Grace Rauh of The New York Sun wrote, “Mr. Doctoroff, who will oversee almost 10,000 employees, said yesterday he is pleased to be joining a leading global organization in an industry he is passionate about, and that he is thrilled ‘to remain part of the Bloomberg family.’

“Mr. Bloomberg told reporters that Mr. Doctoroff’s departure was bittersweet, and added that he hoped to find someone even better to take over as the city’s economic development chief.”

Rauh also wrote, “The mayor said that he recently considered selling the company but decided against it, adding that Bloomberg LP is not for sale, is not going to change management, and is not looking to acquire new businesses.”