How Dykstra used Cramer and TheStreet.com

Randall Lane, the former editor of Trader Monthly, writes about how former baseball player Lenny Dysktra used his friendship with TheStreet.com co-founder Jim Cramer to make it appear he was a stock-picking genius on the market news Web site and elsewhere. 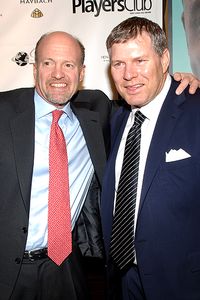 Lane writes, “Cramer, I am sure, had no knowledge of Dykstra’s ‘pay to plug’ scheme — an arrangement that could well lead to a Securities & Exchange Commission investigation. He was just a dupe. But his relentless endorsements and promotion of the ballplayer’s stock-picking over the years must now surely rank as his most ill-conceived.

“Cramer’s effusive blessing, and the fact that his highly legitimate TheStreet.com tallied Dykstra’s impressive track record (as late as last year, Dykstra bragged on the site that he had picked 96 winners against only one loss) impressed everyone from CNBC to The New Yorker. It also, for a time, impressed me.

“I was running a company I had co-founded: Doubledown Media, which produced glossy magazines like Trader Monthly, Dealmaker, Private Air, and other titles for the rich and profligate.

“Lenny Dykstra called me in 2007 as randomly as he had called Cramer, and within 24 hours he hired me to produce The Players Club, a financial advice magazine for professional athletes. Dykstra introduced me to his athlete buddies, everyone from John McEnroe to Tim Brown to Keith Hernandez. But he was especially proud of his friendship with Cramer, a relationship he waved around like a magic cloak of legitimacy. He’d play me Cramer’s voicemail messages, or forward me their emails back-and-forth.”