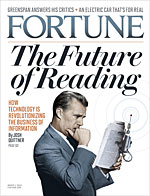 Kelly writes, “‘We’re redesigning it from a graphic and design point of view and to some extent from an editorial point of view,’ said Managing Editor Andy Serwer of the new issue, which has a March 22 cover date.

“Serwer said the decision to press ahead with a new look for the magazine, in spite of the brutal ad decline that has hit many titles, reflected Time Inc.’s bet that you have to be in it to win it.

“‘For all the doomsday scenarios people are painting, people are still reading magazines,’ said Serwer. ‘To be in the magazine business, do it right.’

“Ford also said the redesigned issue will be Fortune’s fattest issue since 2008.”