Economist is influencing other magazines

Dante Chinni wrote in the Christian Science Monitor that the success of The Economist magazine in the United States is beginning to have an impact on other publications and the strategies they take to attract more readers. 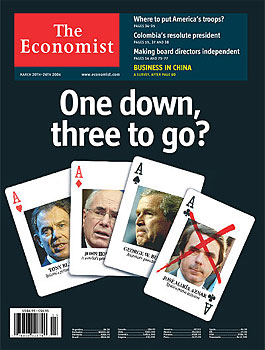 Chinni, a senior associate at the Pew Project for Excellence in Journalism in Washington, wrote, “The British news weekly has seen its circulation jump by about 300 percent, despite the fact that it is less flashy, more serious, and costs more than twice as much as its US counterparts. And since its launch in 2001, The Week, a new kind of Reader’s-Digest-type summary of news accounts from other organizations, has attracted 439,000 readers.

“So maybe it’s all about format and content, and maybe Time’s moves indicate that the other weeklies are beginning to notice.

“Time’s new publishing schedule will mean it hits the streets on the same day as its British competitor. And Time’s idea about circulation, placing less emphasis on quantity, suggests an approach that several publications, including The Economist, have pursued: It’s not how many subscribers you have; it’s who they are.

“The strategy is practiced by media outlets that are sometimes called the ‘elite media.’ They aim at better educated, more-affluent audiences that have more money to spend on news and are more desirable to advertisers. The news outlets that serve them place a premium on trying to bring more depth and breadth to their coverage.”

Read more here. Another member of the elite media, wrote Chinni, is The Wall Street Journal.