Ken Shepherd of the Business & Media Institute notes that a recent story on CNN by Fortune contrbuting editor Andy Serwer failed to acknowledge the original source of a story.

Shepherd wrote, “CNN business contributor Andy Serwer reported on a curious policy change at Wal-Mart stores: theyâ€™re giving first-time shoplifters a break for inexpensive merchandise. The story was not meant to be publicly announced and could cause an up-tick in shoplifting at the stores. Yet Serwer left out that The New York Times broke the story after being handed internal documents from an anti-Wal-Mart group funded by labor unions.

“If you are caught in a Wal-Mart stealing less than $25 of merchandise and itâ€™s your first time, you get a pass,” Serwer reported in a ‘Minding Your Business’ update on the July 13 ‘American Morning.’

“Serwer added that the policy change came as a result of ‘police around the country’ complaining about too many shoplifting calls arising from the old ‘zero tolerance’ policy.

“‘Kind of odd to announce it, though,’ co-host Soledad Oâ€™Brien interrupted. 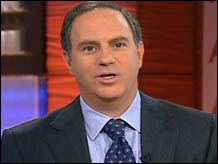 “‘Theyâ€™re not announcing it,’ replied Serwer, adding that ‘The New York Times got these documents, this internal document, and actually in this story the police are suggesting’ that ‘people may start to stick more things in their pocket’ now that they know about the policy.

“What the Fortune magazine editor left out was that Times writer Michael Barbaroâ€™s July 13 story resulted from documents handed to him by an anti-Wal-Mart group funded by the United Food and Commercial Workers Union.”