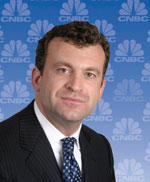 Friedman wrote, “Ratigan had no formal on-air training before he answered a house ad at Bloomberg, his previous employer, a decade ago. It invited employees to audition for the then-burgeoning Bloomberg TV operation.

“Too many people in TV news strive to look and sound just like everyone else. There is nothing smooth or polished about Ratigan, though he isn’t quite as wild and crazy as CNBC’s Jim Cramer. (Then again, who is?)

“Like Cramer, Ratigan has communications skills, charisma and a solid knowledge of the financial markets. Before Ratigan came to TV, he was an accomplished mergers and acquisitions reporter for the Bloomberg newswire. In the late 1990s, nobody at Bloomberg got harder-hitting stories or did more to put the company on an equal footing with the Wall Street Journal. (I know this because I sat next to Ratigan for a year when we were colleagues at Bloomberg News.)

“‘My real value-add is in the analysis, turning cocktail-party conversation into information to try to help viewers make more money.’ he said.”