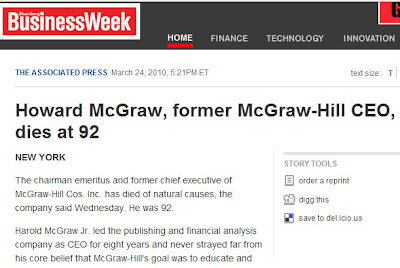 Weiss writes, “BW was not alone. Apparently nobody at the AP or its member papers (such as this one) noticed that his name is ‘Harold’ not ‘Howard.’ Otherwise I assume there would have been a correction and all these mistakes would have been fixed.

“Strange isn’t it? You’d expect that if the error was going to be corrected anywhere, it would be at BW.

“I guess there’s a bit of symbolic significance in this boner going uncorrected. Over the past few years, BW has become unrecognizable since the days when McGraw ran the magazine’s former parent in the seventies and early eighties. One observer recently contended that BW had morphed over the past few years into the ‘Reader’s Digest of American finance.'”