U2 lead singer Bono‘s company, Elevation Group, that includes other investors have bought a large minority stake in the company that owns Forbes magazine, according to a story in the Monday New York Times.

Reporter David Carr writes, “They now have a hand in a storied brand that has been buffeted by its status as an unaligned, independent magazine. Forbesâ€™s competitors have significant corporate backing â€” Fortune is owned by Time Warner, BusinessWeek by McGraw-Hill, and CondÃ© Nast will soon introduce a magazine to be called Portfolio. 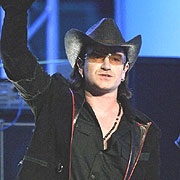 has a little more than half the ads it had at the height of the technology boom â€” combined with Mr. Forbesâ€™s two runs for president (costing north of $70 million) left the family in need of additional liquidity. But Mr. Forbes said the partnership with Elevation was driven by ambition, not financial weakness.

“‘We have investment needs for real opportunities,’ he said. ‘The whole world has opened up again, and we donâ€™t want our children to think we just sat our hands. Yes, it has increased family liquidity â€” we do have estate-planning to do â€” but we are now poised to go against the behemoths.'”

The press release, issued at 12:30 a.m. EST Monday morning, can be found here.